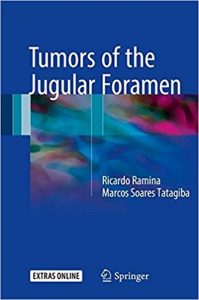 This book covers all aspects of the diagnosis and treatment of tumors of the jugular foramen – cranial base lesions that present particular diagnostic and management difficulties and remain challenging to remove despite advances in surgery and interventional neuroradiology. The authors have developed novel concepts and surgical techniques relating to management of the facial nerve, reconstruction of the cranial base, and resection of large tumors with intra- and extracranial extension. These techniques, as well as anatomic studies in cadavers, are presented by means of surgical photographs, illustrations, and videos. Tumors of the Jugular Foramen will be of interest to all specialists involved in the management of these challenging tumors, including neurosurgeons, ENT surgeons, neuroradiologists, neurologists, neurointensivists, radiotherapists, oncologists, and physiotherapists.

Ricardo Ramina, MD, PhD, studied medicine at the Pontifical Catholic University in Curitiba, Brazil, before completing residencies in neurosurgery in Curitiba, Frankfurt, and Hannover.  In 1986 he was appointed Chairman of the Neurosurgical Department at Nações Hospital in Curitiba, Brazil and since 2004 he has been Chairman of the Neurosurgical Department of the Neurological Institute of Curitiba [WFNS (World Federation of Neurosurgical Societies) Post-Graduate Training Center]. Since 2006 he has been Professor of the Postgraduate Course in Surgery at the Pontifical Catholic University of Curitiba, having previously been an Associated Professor of Neurosurgery at George Washington University, Washington and State University of Campinas, São Paulo, Brazil. He has published more than 160 papers in peer-reviewed journals and has given more than 600 lectures and presentations on various topics in neurosurgery as an invited guest or guest of honor at national and international congresses.