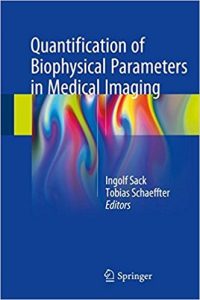 This book provides a selection of essential knowledge on the image-based quantification of biophysical parameters for the purpose of clinical diagnosis. The authors regard clinical imaging scanners as physical measurement systems capable of quantifying intrinsic parameters for depiction of the constitution and biophysical properties of in vivo tissue. On the one hand, this approach supports the development of new methods of imaging highly reproducible, system-independent, and quantitative biomarkers, and these methods receive detailed attention in the book. On the other hand, the reader will also gain a deeper understanding of how physical tissue properties interact with the generation of signals in medical imaging, opening new windows on the intricate and fascinating relationship between the structure and function of living tissues. The book will be of interest to all who recognize the limitations of basing clinical diagnosis primarily on visual inspection of images and who wish to learn more about the diagnostic potential of quantitative and biophysics-based medical imaging markers and the challenges that the paucity of such markers poses for next-generation imaging technologies.

Ingolf Sack is a Heisenberg professor of the German Research Foundation for Experimental Radiology and Elastography at Charité-Universitätsmedizin Berlin, Germany. He received a PhD in Chemistry from Freie Universität Berlin for the development of methods in NMR spectroscopy. He then worked at the Weizmann Institute in Rehovot, Israel and at the Sunnybrook Hospital, Toronto. Since 2003 he has led an interdisciplinary team of physicists, engineers, chemists, and physicians who have pioneered pivotal developments in time-harmonic elastography of both MRI and ultrasound for many medical applications.

Tobias Schaeffter is the head of divison of Medical Physics and metrological IT at the Physikalisch-Technische Bundesanstalt (PTB) in Berlin, Germany. He is also Professor in Imaging Sciences at the department of biomedical engineering at King’s College London, UK. Tobias Schaeffter studied electrical engineering at TU-Berlin and did his PhD in magnetic resonance spectroscopic imaging (MRSI) under supervision of Prof. Leibfritz at University Bremen in 1996. From 1996-2006, he worked as a Principal Scientist at the Philips Research Laboratories in Hamburg, Germany, where he managed MR-research projects , their clinical evaluation and product integration. In April 2006, he took up the Philip Harris Professorship of Imaging Sciences at King’s College London. In 2012 he became department head of biomedical engineering and was director of the doctorial training centre in medical imaging. Since 2015 he moved to  PTB as a head of divison. A major aim of his research is the investigation of fast and quantitative MR-techniques for cardiovascular applications.