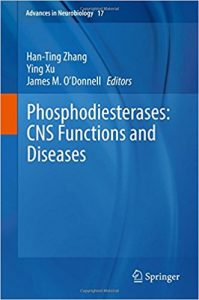 PDEs are a family of enzymes that catalyze the hydrolysis of intracellular cyclic neucleotides. They are implicated in a number of disorders and dysfunctions and PDE inhibitors have already proven to be effective therapies for erectile dysfunction, COPD, and psoriatic arthiritis.  This family of enzymes also plays a role in diseases and disorders of the CNS such as depression, anxiety, schizophrenia, and Alzheimer’s Disease. Unfortunately no effective PDE inhibitors have been developed for the treatment of these diseases.  The proposed book will be a comprehensive overview of the current state of basic and translational research on PDE inhibitors written by internationally recognized experts. Authors will also discuss potential PDE subtypes and splice variants in the hopes that this will spur more creative approaches to PDE targeting drugs.

Dr. Zhang’s major research interests focus on intracellular signaling in the mediation of neurodegenerative and psychiatric disorders. More specifically, he is interested in exploring the roles of phosphodiesterase (PDE)-mediated cyclic nucleotide (cAMP, cGMP) signaling in depression, anxiety, alcohol dependence, drug abuse, and cognition deficits associated with neurodegenerative disorders such as Alzheimer disease. Development of novel drugs for treating these disorders is also one of his research foci.

Dr. Zhang has published nearly 80 research papers and review articles and 18 book chapters, most of which focusing on PDEs, in particular the PDE4 enzyme family. He has been awarded the NARSAD Young Investigator Award twice (2006 and 2008). Dr. Zhang has been served as the Guest Chief Editor of Current Pharmaceutical Design and currently serves as the Deputy Chief Editor/Associate Editor for Metabolic Brain Disease, Frontiers in Pharmacology, Frontiers in Aging Neuroscience, Translational Neuroscience Review, Austin Psychiatry, and Editorial Board member for Scientific Reports and several other international journals.