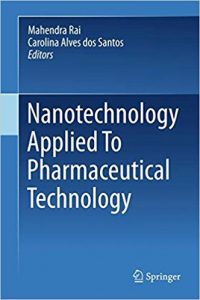 Highly-experienced nanotech researchers Rai and Alves dos Santos have gathered a truly international and interdiscplinary group of authors to contribute to this edited work on nanotechnology and how it applies to pharmaceutical technology.  They keep the focus on devising innovative nanopharmaceutical products and solutions to treat such diseases as cancer, infections, eye diseases, and in tackling multi-drug resistance threats. Nanotechnology Applied to Pharmaceutical Technology consists of four sections that include coverage of biosynthesis of nanoparticles, nano-material based formulations and toxicity, and safety issues.

Mahendra Rai is a Professor and Head at the Department of Biotechnology, Sant Gadge Baba Amravati University at Amravati, Maharashtra, India. He was a Visiting Scientist at the Department of Bioenergetics, University of Geneva, Switzerland in 2004 and at the Department of Plant Protection of Debrecen University, Debrecen, Hungary in 2005 and 2008. He visited Department of Chemical Biology, University of Campinas, Brazil under Indo-Brazil Research Programme (DST-CNPq collaboration) in 2009, 2011 and 2012. In 2012, he was visiting Professor in Nicolaus Copernicus University, Torun, Poland. In 2013 he was invited by State University of Campinas, Brazil. He was also visiting professor in 2015 in Ostrava, Czech Republic. His area of expertise includes microbial biotechnology and nanobiotechnology. His present research interests are nanobiotechnology in medicine, agriculture and bioethanol production. He has published more than 325 research papers in national and international journals. In addition, he has edited/authored more than 40 books and 6 patents.
Carolina Alves dos Santos has Bachelor in Pharmaceutical Sciences from Pontifícia Universidade Católica de Campinas –Brazil (2004). She earned a PhD from University of São Paulo at School of Pharmaceutical Sciences-Brazil (2011);   and post doctorate  at Polytechnic School in University of São Paulo-Brazil (2014). Presently she is a Researcher at the University of Sorocaba-Brazil (2016). She has published 20 papers in international journals, 1 patent and presented papers in several conferences. Moreover, she has experience in the field of Pharmacy, with emphasis in Pharmaceutical Technology, working mainly on drug stability, biosensors, validation and development of analytical methodologies, nanotecnhology and nanobiotecnhology.