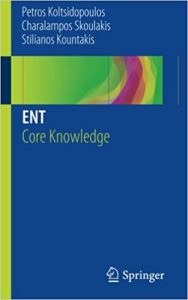 This concise book summarises the basic knowledge required to be an otolaryngologist. It covers the 300 main ear, nose and throat diseases, summarizing the main symptoms of each disease, the required diagnostic process and the therapeutic approach.

This compact presentation of knowledge is very useful and practical. The reader can quickly access essential information on the majority of the ENT diseases.

ENT: Core Knowledge is ideal for ENT residents who are preparing for Board exams, for specialists who want to refresh and update their knowledge, and for general practitioners with a special interest in ENT.

Petros Koltsidopoulos  was born in Greece in 1976. He gained his medical degree from Aristotle University, Thessaloniki, Greece in 2001 and became a Specialist in Otolaryngology – Head and Neck Surgery (Greek National Exam Board) in 2010. He has since worked as a Consultant at the General Hospital of Volos, Greece, and Iaso Thessalias General Hospital, Larissa, Greece, where he is now Head of Department of Otolaryngology. He completed his PhD in Neurotology in 2013 and FEB ORL-HNS (Fellow of the European Board of Otorhinolaryngology, European Board Exam) in 2014. He is currently completing a Master of Science in Rhinology and Rhinosurgery (Democritus University of Thrace, Greece). He has 14 Publications in peer-reviewed international journals, 3 Oral and poster presentations in international conferences and 30 Oral and poster presentations in Greek conferences.