Clinical Cases in Early Orthodontic Treatment: An Atlas of When, How and Why to Treat 1st ed. 2017 Edition 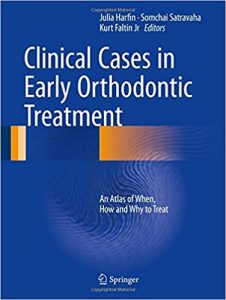 This book describes the most common types of malocclusion in children and presents illustrated step-by-step guidance on the procedures employed in their management, with the focus on early intervention. Advice is provided on the challenging decisions of when to start orthodontic treatment and whether to choose a one-phase or a two-phase treatment, taking into account the malocclusion, its severity, and its etiology. Among the topics addressed in individual chapters are the treatment of atypically rotated central incisors, early management of periodontal problems, correction and maintenance of the position of the first upper molar, early treatment of class II and class III malocclusions, use of lingual brackets, management of dental asymmetries, and the Bennun-Harfin protocol for interdisciplinary oral cleft treatment. The most important controversies in early orthodontic treatment are also discussed in detail. The book is enhanced by numerous clinical photographs and presentation of long-term results. It is written by the most experienced team of doctors in the field and will be a valuable asset for all who specialize in odonto-pediatric and orthopedic-orthodontic treatments.