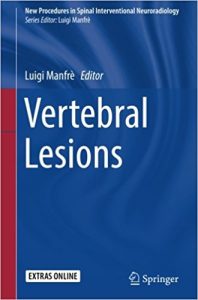 This easy-to-consult guide describes new minimally invasive procedures for the treatment of vertebral lesions that are accompanied by fewer complications and side-effects, reduce the risks of anesthesia, and lower costs. Clear accounts are provided of CT and X-ray guided techniques for vertebral augmentation in different regions of the spine and for the treatment of vertebral tumors by means of cryoablation, radiofrequency ablation, and embolization. Helpful information is also provided on imaging, biomechanics, biopsy, and biomaterials. Like other books in the Springer series New Procedures in Spinal Interventional Neuroradiology, this practice-oriented volume will fill a significant gap in the literature and meet the need expressed by a large number of specialists (interventional neuroradiologists and radiologists, neurosurgeons, and orthopedists) for a topical and handy guide that specifically illustrates the presently available materials and methods.

Luigi Manfrè gained his MD in 1989 and then completed his specialization in Diagnostic and Interventional Radiology in 1993. He worked as a researcher at Palermo University from 1993 to 2001, and then as an Interventional Neuroradiologist at Cannizzaro Hospital in Catania, Italy. He is currently Head of the Minimally Invasive Spine Therapy Unit at Cannizzaro Hospital. His main interests are percutaneous minimally invasive spine surgery using X-ray and CT-guided techniques with only local anesthesia. He has personally performed more than 3000 procedures in this field since 1999, including procedures using third-generation interspinous spacers, the full range of augmentation procedures for the spine (vertebro/kypho/vesselplasty and vertebral stent), posterior trans and intraarticular fusion, radio and cryoablation of tumors and facets, and percutaneous discectomy. Dr. Manfrè was one of the founding members of the European Vertebroplasty Research Team (EVEREST) in 2004 and has won 16 international and national prizes. He won the “best paper of the year” prize from the American Society of Spine Radiology in 2007, 2009, and 2012. He has published more than 200 papers and with Springer he has previously published Spinal Imaging (in 2007), Interventional Neuroradiology of the Spine (in 2013), and Imaging Spine After Treatment (also in 2013).