The Orthopedic Educator: A Pocket Guide 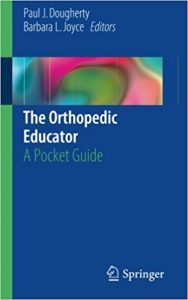 This concise pocket guide is the first of its kind to provide a solid foundation for those who are involved in academic orthopedic surgery education for medical students, residents, and faculty and program heads. Opening with an exploration of the history of orthopedic education in the United states as well as a sampling of international experiences, the book then describes curriculum design for competency-based education, teaching as coaching, and how to teach operative skills. A trio of chapters on working with residents covers the sometimes challenging areas of assessment, remediation and providing constructive feedback. Subsequent chapters detail the development of orthopedic faculty and elements of successful programs as well as tips for directors creating or maintaining a program.

While several books exist to guide educators in the non-surgical fields, none exist to provide guidance for surgical fields, much less orthopedic surgery. Ideal for any and all professionals involved in orthopedic education, The Orthopedic Educator serves to offer insight for making the most out of the time available for teaching, offering advice from experienced educators on how to build and maintain a successful program.

Paul J. Dougherty, MD is Professor and Chairman of the Department of Orthopaedic Surgery at the University of Florida College of Medicine-Jacksonville, as well as the residency Program Director. He has been a residency program director for the past nineteen years, spanning military, university and managed care environments. As part of this, he has graduated over eighty orthopaedic surgeons to practice. Dr. Dougherty is a retired US Army Colonel, who deployed to Somalia and Afghanistan during his career. He has been the editor for the American Academy of Orthopaedic Surgeons monograph entitled “Gunshot Wounds”, as well as being on the editorial board for the NATO Emergency War Surgery Handbook, 4th US edition, the book which describes the initial care of battlefield injuries. Dr. Dougherty received his MD from Uniformed Services School of Medicine, located in Bethesda, Maryland. He did his surgical internship at William Beaumont Army Medical Center in El Paso, Texas. His orthopaedic residency was conducted at Letterman Army Medical Center in San Francisco, followed by the Oakland Naval Hospital after Letterman closed due to downsizing of the US military. Dr. Dougherty subsequently completed an Orthopaedic Trauma Fellowship at the University of Louisville, in Louisville Kentucky. Currently, Dr. Dougherty has an education column which is published quarterly in Clinical Orthopaedics and Related Research. He has over fifty published peer reviewed publications, in the areas of orthopaedic trauma, education, amputee care and wound ballistics. He is a Member-at- Large for the Council of Orthopaedic Residency Directors (CORD), and is also an oral examiner for the American Board of Orthopaedic Surgery Part 2 Certifying Examinations.