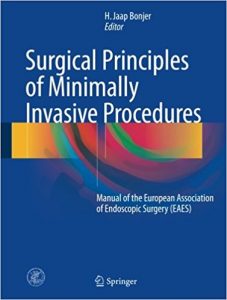 In addition to the operative instructions, Surgical Principles of Minimally Invasive Procedures provides information on patient selection, choice of operative approach, special needs for minimally invasive procedures, and the early diagnosis and treatment of complications after surgery. ​

Hendrik Jacob Bonjer graduated from Medical School at the University of Leiden, the Netherlands, in 1985. He was awarded his PhD from Erasmus University, Rotterdam, the Netherlands, in 1992 and the following year became a board-certified general surgeon. In 2004 Dr. Bonjer became Director of Minimally Invasive Surgery and Surgical Leader of the Renal Transplantation Program at Capital Health and Professor of Surgery at Dalhousie University, Halifax, Nova Scotia, Canada. In 2006 he was appointed Professor and Chairman, Department of Surgery, Capital District Health Authority and Dalhousie University. Since 2009 he has been Chairman of the Department of Surgery, Free University Medical Centre, Amsterdam, the Netherlands. Dr. Bonjer has been President of the Dutch Society of Endoscopic Surgery since 2000.

He is a member of various professional bodies, including the European Association of Endoscopic Surgery, the International Society of Surgery, and the Society of Gastro-intestinal Endoscopic Surgeons. He is a member of the International Advisory Board of Surgical Endoscopy. Dr. Bonjer has been principal investigator for several clinical trials and has published almost 170 articles in peer-reviewed journals