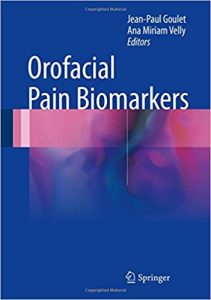 This book provides up-to-date information on all aspects of orofacial pain biomarkers. It opens by presenting background information on clinical phenotypes and the neurobiological substrates underlying chronic orofacial pain and by explaining the potential role of biomarkers in the diagnosis, prognostic evaluation, and treatment of orofacial pain. The main section of the book examines the contribution of human and animal studies to the field of biomarkers for orofacial pain and discusses biomarkers for masticatory muscle pain, temporomandibular joint pain, neuropathic face pain, and autonomic nervous system involvement in trigeminal facial pain. The potential impacts of the immune system on orofacial pain biomarkers and candidate gene phenotypes with possible links to chronic orofacial pain conditions are also addressed, and differences and similarities between saliva and serum biomarkers for pain are explained as well. The final section covers research-related issues in assessment methods and statistical analyses used in evaluating biomarkers, identifies future challenges and suggests new directions in the field.

Jean-Paul Goulet, DDS, MSD, FRCD, is a Professor in the Stomatology Section of the Faculty of Dentistry at Laval University, Quebec, Canada. Dr. Goulet studied dentistry at the University of Montreal and later gained his MSD in oral medicine from the University of Washington. He joined the School of Dentistry at Laval University as a Clinical Instructor in 1973 and was subsequently appointed Assistant Professor (1980), Adjoint Professor (1983), and Associate Professor (1987) before taking up his present position in 1992. Dr. Goulet is a Fellow of the Royal College of Dentists of Canada, the American Academy of Orofacial Pain, and the Académie Dentaire du Québec. In 2011 he was awarded the “Micheline Blain” Prize for his contribution to the research network “Réseau de recherche en santé buccodentaire et osseuse” (Research Network in Oral and Bone Health). Dr. Goulet is a reviewer for several leading journals. He is the author of 51 articles in peer-reviewed journals.

Ana Miriam Velly, DDS, MSc, PhD, is Assistant Professor in the Faculty of Dentistry, McGill University, Montreal, Canada and an investigator at the Centre for Clinical Epidemiology, Lady Davis Institute, Jewish General Hospital, Montreal. Dr. Velly gained her DDS from the Universidade de Mogi Das Cruzes, São Paulo, Brazil in 1983 and subsequently was awarded an MSc in Neuroscience and a PhD in Epidemiology from the University of Montreal. From 2006 to 2012 she was a research associate in the Department of Diagnostic and Biological Sciences, School of Dentistry, University of Minnesota, Minneapolis, USA and also Director of the National Institute of Dental and Craniofacial Research (NIDCR)’s Temporomandibular Joint Implant Registry, Division of Temporomandibular Disorders (TMD) and Orofacial Pain. Dr. Velly served as President of the Neuroscience Group of the International Association for Dental Research from 2007 to 2009, and in 2011/12 she chaired the group. She also holds a Councilor-at-Large position with the Canadian Association for Dental Research and is the author of almost 50 articles in peer-reviewed journals.