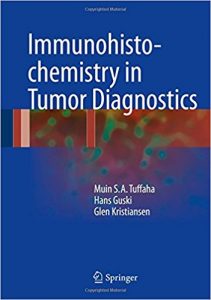 This book offers a comprehensive yet concise overview of immunoprofile of tumors and antibodies used in contemporary surgical pathology, and provides diagnostic algorithms for approaching tumor diagnostics.

Immunohistochemistry has become the most important ancillary technique in diagnostic pathology in the last 20 years, and unlike most books on tumor diagnostics, this volume discusses in details immunohistochemical biomarkers, diagnostic approaches and their pitfalls, as well as the immunoprofile of common tumors throughout all systems of human body. With numerous color figures and detailed flowcharts, it appeals to all pathologists be they young residents in training who want a brief introduction to this technique, or specialists in need of a reliable and comprehensive reference resource in tumors diagnostics.

Dr. Muin S.A. Tuffaha obtained a degree in general medicine with honors (MD) from the Medical Institute Kiev, UDSSR in 1986 before passing the German Board in Pathology. He continued as specialist in pathology at the Technical University of Dresden`s Institute of Pathology. Dr. Tuffaha was the deputy head of the Department of Head and Neck Pathology at the University of Hamburg. Since 2010, Dr. Tuffaha has been head at the Institute of Pathology, Carl-Thiem-Hospital a teaching hospital of the Medical Faculty Charité, Berlin, Germany. He received an honorary Professor from the Kiev Medical University of UAFM.

Professor Hans Guski is Professor of Pathology and the former Deputy Director of the Institute of Pathology of the Humboldt University of, where he worked for more than 40 years. During this time, he mentored about 70 doctoral candidates and published over 500 scientific articles and presented papers. He is co-author of several textbooks and monographs, including a monograph on immunohistochemical studies in tumors published in Russian by Dr. Tuffaha (Kiev 2013). Professor Guski has been an ordinary member of the Russian Academy of Natural Sciences since 1992 and is an honorary member of several international medical societies. He received an honorary doctorate from the State University of Saransk, Russia, in 1996, and has been a Guest Professor of the University of Havana, Cuba, since 2004.Professor Glen Kristiansen has been a professor of pathology and chair of the Institute of Pathology, University Bonn, Germany since 2011. From 2007 to 2011, he was a professor of molecular tumor pathology and head of the Immunohistochemistry Laboratory at the Institute of Surgical Pathology, University Zurich, Switzerland. He was also resident and later consultant and head of the Immunohistochemistry Laboratory at the Institute of Pathology, Charité, Berlin, Germany (1998-2007). In 2014, he broadened his skills at the Cedars-Sinai Hospital Medical Center, Los Angeles, USA. Professor Kristiansen has authored or co-authored more than 300 scientific publications and is an acclaimed speaker at international congresses.