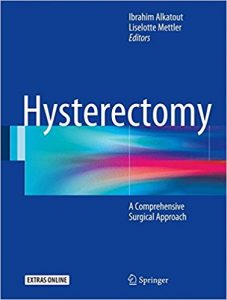 This book initiates the descriptions of the practical performance of different hysterectomies with conventional and robotically assisted laparoscopy, laparotomy and vaginal surgery. Laparoscopic hysterectomy has been out as an additional technique for hysterectomies for the last couple of decades. As the necessary light, augmentation and advanced skill has only been introduced into this already 200 year old surgical procedure within the last few decades by laparoscopy, the editors aim to look at the laparoscopic procedures followed by the traditional techniques of hysterectomy with laparotomy and vaginal surgery.

Ibrahim Alkatout studied medicine and medical ethics in Marburg, Dresden and Kiel. He was a resident in the Kiel Institute of Pathology from 2005 to 2007 and in the Kiel University Department for General Surgery from 2007 to 2009. Since 2009 he has been working in the Department of Obstetrics and Gynaecology, University Hospitals Schleswig-Holstein, Campus Kiel. In 2013 he was appointed senior consultant in obstetrics and gynecology with the subspecialty endoscopic surgery. In 2014 he became Head of the Kiel School of Gynaecological Endoscopy and was appointed university lecturer.

Liselotte Mettler was born in Vienna, Austria. From 1959-1981 she conducted her medical studies, doctorate, gynaecological specialist training, habilitation, and professorship in Tübingen, Vienna, and Kiel. From 1981-2008 she was Deputy Director of the Department of Obstetrics and Gynaecology at the University Hospitals Schleswig-Holstein. From 1990-2008 she was Director of the Kiel School of Gynecological Endoscopy and also Head of the Kiel Gynaecological Endocrinology and Reproductive Medicine Division. Her main fields of activity are reproductive medicine, gynaecological endoscopy, and gynaecological endocrinology. Professor Mettler is actively participating in many societies and organisations. Despite retiring in 2008 she also serves as General Secretary of the International Academy of Human Reproduction (IAHR) with the 15th World Congress planned for March 2013 in Venice, Italy.