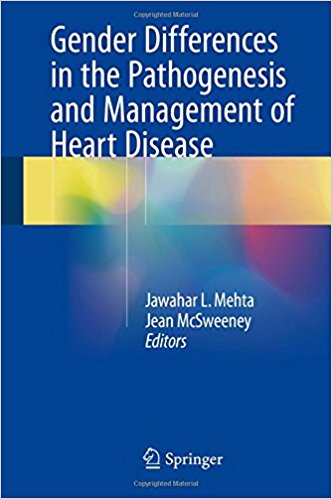 This book reviews all aspects of the diagnosis and management of heart disease in women, covering areas such as gender differences in metabolic syndrome, hypertension and atherogenesis. Gender differences in cardiovascular diseases are widespread, but while gender medicine takes into account the effects of sex and gender on the health of women and men, traditionally, women have been underrepresented in cardiovascular clinical trials, in management of different cardiac diseases and drug use.

Gender Differences in the Pathogenesis and Management of Heart Disease deals with the gender-specific differences in cardiac physiology and diseases and brings into perspective the critical significance of gender in management of cardiovascular disease presentations and management. As such it is of enormous use to all clinical staff who manage women with cardiovascular disease.

Dr. Mehta received his MD degree in India and PhD in Sweden, and completed his post-graduate education in New York and Minnesota. He joined the faculty of the college of medicine of the University of Florida where he rose to be University Research Foundation professor.He moved to Little Rock in 2000 as the first Stebbins Chair in Cardiology and Professor of Medicine and Physiology and Biophysics to lead the Division of Cardiovascular Medicine at UAMS and VA hospitals with over 100 physicians, graduate and post-graduate students and staff. Dr. Mehta serves on the editorial board of several major cardiology, physiology and pharmacology journals, including Circulation, Hypertension, American Journal of Cardiology, European Heart Journal, Journal of the American College of Cardiology, and the World Journal of Cardiology.  He has published over 1000 papers, abstracts and book chapters.  He is a member of many prestigious academic societies, including the Association of America Physicians, American Society for Clinical Investigation and Association of University Cardiologists

Dr. Jean McSweeney is a professor and Associate Dean for Research at the University of Arkansas for Medical Sciences in Little Rock, Arkansas. She received her Baccalaureate in Nursing from Cameron University in Lawton, Oklahoma, her Masters in Nursing from The University of Texas at Arlington, and her PhD from the University of Texas at Austin. She is a Fellow in both the American Heart Association and the American Academy of Nursing. Dr. McSweeney is a research pioneer in the field of women’s cardiovascular disease and published the first major study that described women’s symptoms of heart disease. Findings from her studies about women’s early warning and acute symptoms of heart disease across ethnic groups, received national and international coverage from television and radio stations; such as BBC, CNN & CBS Evening News and newspapers such as the New York Times and Chicago Tribune. She has published in numerous nursing and medical journals including Circulation. She was the lead author on a Scientific Statement from the American Heart Association on Ischemic Heart Disease in women. She serves on several editorial boards and is a member of numerous organizations.