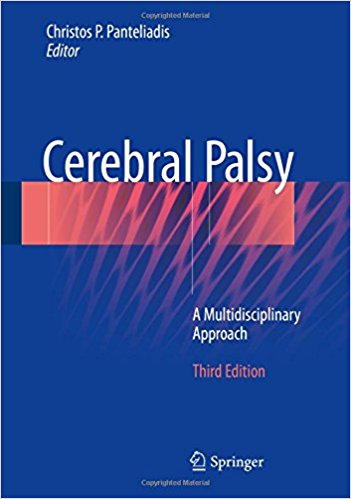 This third edition systematically reviews recent developments in the diagnosis and evidence-based treatment of cerebral palsy, a consequence of foetal and early infant brain damage resulting in lifelong disabilities with a range of clinical characteristics. The first part discusses the definition, aetiology, classification, imaging and neuropathology, while the second focuses on the management of the individual challenges that children with cerebral palsy face, such as spasticity, dyskinesia, feeding problems and scoliosis. Based on the diverse characteristics of cerebral palsy, children require care from various specialists, including neuro-paediatricians, orthopaedists, psychologists, epidemiologists, physiotherapists and occupational therapists. This work was written by an international team of such specialists, providing a comprehensive mix of perspectives and expertise.

Prof. Panteliadis received his medical degree from the Kiel Medical School in Germany, have completed the speciality training in Hamburg and sub- speciality training in Frankfurt, Hamburg and in other Medical Schools in Germany. Promotion in Kiel and Habilitation in the Medical School of University Thessaloniki. He is a former Professor of Pediatrics and Pediatric Neurology at Aristotle University, Greece, and Director of the 3rd Pediatric Department at Ippokraton Hospital. He retired in 2010, and has since been active at a private clinic. From 2005 to 2009 Prof. Panteliadis developed and improved the health system in northern Greece. He has organized several conferences, w

orkshops, symposia and further education courses; further, he established the Society of Pediatric Neurology in Greece and was the president of this society for many years. Prof. Panteliadis is the author of several articles and textbooks for students and pediatricians, neuropediatricians and neurologists in Greece. He has edited three editions of “Paediatric Neurology” in English; two editions of “Neuropaediatrie – Evidenzbasierte Therapie” in German; two editions of “Neurocutaneous Disorders – A Clinical, Diagnostic and Therapeutic Approach” in English; and two editions of “Cerebral Palsy – A Multidisciplinary Approach” in English, the third edition of which is currently in preparation.