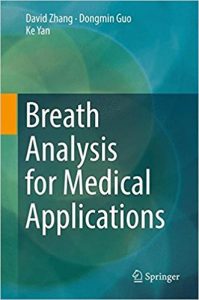 This book describes breath signal processing technologies and their applications in medical sample classification and diagnosis. First, it provides a comprehensive introduction to breath signal acquisition methods, based on different kinds of chemical sensors, together with the optimized selection and fusion acquisition scheme. It then presents preprocessing techniques, such as drift removing and feature extraction methods, and uses case studies to explore the classification methods. Lastly it discusses promising research directions and potential medical applications of computerized breath diagnosis. It is a valuable interdisciplinary resource for researchers, professionals and postgraduate students working in various fields, including breath diagnosis, signal processing, pattern recognition, and biometrics.

David Zhang graduated in Computer Science from Peking University. He received his MSc in 1982 and his PhD in 1985 in Computer Science from the Harbin Institute of Technology (HIT), respectively. From 1986 to 1988 he was a Postdoctoral Fellow at Tsinghua University and then an Associate Professor at the Academia Sinica, Beijing. In 1994 he received his second PhD in Electrical and Computer Engineering from the University of Waterloo, Ontario, Canada. He is a Chair Professor since 2005 at the Hong Kong Polytechnic University where he is the Founding Director of the Biometrics Research Centre (UGC/CRC) supported by the Hong Kong SAR Government in 1998. He is Founder and Editor-in-Chief, International Journal of Image and Graphics (IJIG); Founder and Series Editor, Springer International Series on Biometrics (KISB); Organizer, the 1st International Conference on Biometrics Authentication (ICBA); Associate Editor of more than ten international journals including IEEE Transactions and so on. He was selected as a Highly Cited Researcher in Engineering by Thomson Reuters in 2014, 2015 and 2016, respectively. Professor Zhang is a Croucher Senior Research Fellow, Distinguished Speaker of the IEEE Computer Society, and a Fellow of both IEEE and IAPR.

Dongmin Guo received her B.S. and M.S. degrees at School of Automation, Northwestern Polytechnical University Xi’an, China in 2003 and 2006, respectively and received her Ph.D. degree at the Hong Kong Polytechnic University, Hong Kong, in 2011. She is currently working as a research associate in Radiology Department, Wake Forest University Health Sciences. Her research interests include bioinformatics and machine learning.

Ke Yan received his B.S. and Ph.D. degrees both from the Department of Electronic Engineering, Tsinghua University, Beijing, China. He was the winner of the 2016 Tsinghua University Excellent Doctoral Dissertation Award. He is currently a postdoctoral fellow in the Lab of Diagnostic Radiology Research, National Institutes of Health, USA. He is studying deep learning methods to analyze medical images. His research interests include computer vision, machine learning, and their biomedical applications.